To say I have been feeling emotional this week would be an understatement. My moods and feelings over this breakup vary from day to day and week to week. Sometimes I feel okay about it – in a logical sense, maybe it really was for the best. Rich and I aren’t exactly the most similar of any two people. I like to hike, exercise, travel, spend time outside as much as possible and go out with friends on the reg. He doesn’t. Though we got along about as well as any two people could and truly adored each other, maybe that wasn’t enough (at least for him). Opposites may attract, but do they make suitable long-term partners? He doesn’t seem to think so. Other times, I feel completely and purely emotional about it. All it took this week for me to go into breakdown mode was a phone call from my best friend from home calling to say “Are you okay?” First response – “yes.” “Your text messages don’t make you sound okay.” Face full of tears and voice cracking – “no.” Seeing Rich last weekend to pick up my things really set the tone for my week and I found myself needing to keep on the track of comforting myself this week.

On this chilly October day, I naturally decided the way to comfort was home-cooking. Not only is it a nice way to heat up the house, it’s another way to make sure I’m taking care of myself physically and keeping myself healthy in this trying time. I spent my Friday night on the town with friends, eating and drinking things that didn’t exactly make me feel like the picture of health (and left me with a horrendous headache, though that may have more to do with the chilly weather rolling in than anything), so this was a nice way to both give myself a project and help keep me healthy, mentally and physically. I also have a pretty crazy busy work week ahead of me this week as well, so this will make sure I don’t end up spending a bunch of unnecessary money eating lunches and dinners out that I don’t want and aren’t good for me.

I did something today that I was extremely impressed with. Not because it’s such a huge feat, but because I am not the world’s most practiced and amazing cook. I’m not entirely hopeless – I can certainly follow a recipe and cook the basics, but I wouldn’t say I’m exactly talented. Anyway, I cooked two dishes at the same time, and didn’t burn anything!!

I stuck with one obvious classic, my mom’s homemade chili, and tried an online recipe for butternut squash risotto for the second time. My mom has always been very into cooking, at least as long as I’ve known her! Growing up, basically everything she made us was homemade/ from scratch. She still always makes sure to ask what we want to eat before we visit (usually multiple times). It’s her way of showing love and care, so using her recipe was an easy way to show myself a little love and care today.

I’m a huge fan of risottos, but had never made one before last week. It’s been a treat I’ve always chosen when given the choice in Italian restaurants, but it is surprisingly easy to make a tasty risotto at home, and adding the butternut squash makes it the perfect hearty, fall meal. I felt like it was missing a little something last time I made it, so decided to try adding mushrooms along with the squash this time. It did the trick and made it seen a bit heartier than with just the squash alone. Both dishes turned out extremely well, so obviously I had both for dinner! And now I will have a couple of easy options for lunches and dinners this week since I won’t have much time to cook.

In case you’d like to try either of these, I have included the recipes below. I’m a vegetarian so obviously I don’t include meat in my chili, but you could certainly add it. I am very much about eating whole, fresh ingredients when possible, but had a can of my mom’s homegrown, home-canned tomatoes on hand, so used that for the chili and it turned out wonderfully. You could also substitute fresh tomatoes or store-canned tomatoes.

I also added garlic this time because I couldn’t get ahold of my mom and my brother told me to, but apparently she does not typically use it. I know I’m an outlier here, but I’m not a huge garlic fan so probably would not have used it had I known it’s not my mom’s norm, but it turned out pretty well all the same. My favorite way to serve chili is over brown rice with cheddar cheese on top, so that’s how I had it tonight, but it’s also delicious served as a stew with homemade bread. 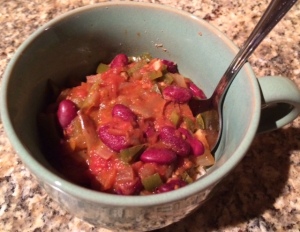 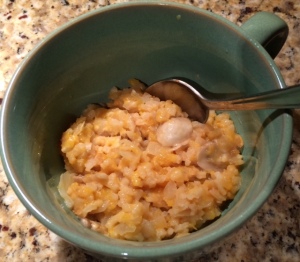